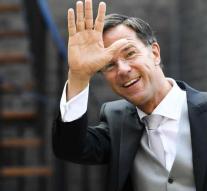 the hague - In the coming period, the Dutch will notice that things are going better. Prime Minister Mark Rutte is convinced of this, on the day that his third cabinet presents a budget for the first time. He mainly cares about international instability.

The government can spend more because the economy is growing so fast. 'This growth spurt seems to perpetuate itself on a multi-year basis. 'In the coming year, investments will be made in healthcare, education and defense. 'People will also notice that things are getting better in the wallet. We see wages rising, there is room for tax relief. '

Rutte also counts on the help of employers to let people experience that things are going better. The Prime Minister points out that 'Collective wages are rising over a broad front. 'A few years ago he had to call on the business community to raise the salaries. 'I do not have to do that now. '

But not everything revolves around what happens within the country's borders, according to the prime minister. 'I think that we as a country also worry about the world. How are major issues such as climate change? These are also subjects that the throne speech pays attention to, how we want to tackle large issues together with society. '

One of those big issues is the pension reform. It must make the pension system future-proof. The Cabinet had hoped to have around with Prinsjesdag. But the negotiations with employers and employees are tough. Rutte remains 'moderately positive. '

He believes that the government is taking sufficient measures to build up buffers for economically bad times. He then points to the attempt to reform the pension system, the reduction of gas production in Groningen and the reform of the labor market.

Several recent studies show that few people have confidence in the government. Rutte thinks that trust can be regained. By 'ensuring that the tax relief comes. We need majorities in both chambers, I really trust that, 'he said with a reference to the minimum majority of government parties in the Dutch Senate and Senate. The latter threatens to lose the coalition again next spring, so that it would be dependent on the help of opposition parties.