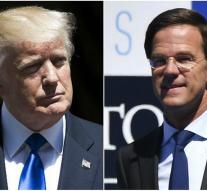 brussels - Premier Mark Rutte does not expect Donald Trump to read the class when he meets him on Thursday. 'I honestly expect a constructive setup,' he said before the NATO summit in Brussels.

The US president will expect the other countries to point out that they need to spend more on defense. 'I will say that we are again heading for the defense spending,' Rutte said.

NATO countries agreed to spend 2 percent of national income there in 2024. The Netherlands is still below 1.2 percent. 'We are giving one billion more than a while ago. It is my intention to further increase that. '

Trump had previously questioned the usefulness of NATO. But he later said 'very wise things' about the importance of the alliance, continued the Prime Minister.

He further said that the Netherlands is in favor of NATO's accession to the coalition that is fighting in Syria and Iraq. The 28 leaders will give green light there later, which is seen as a relief to Trump.

The Netherlands and the other NATO countries are already members of that coalition. NATO's membership as an organization is useful because of NATO's political 'decision-making power' and sharing of information, according to Rutte, and not for military purposes.

'The Netherlands has been in the coalition for a while over its weight,' said Rutte. This is how the Netherlands trains military personnel in Iraq. 'We are doing a lot today, we are promising today to make a tanker available again. '