Home / World / Rutte and May to discuss relations after Brexit 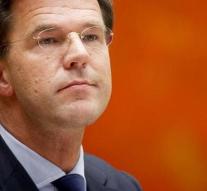 - Prime Minister Mark Rutte said Monday his new British counterpart Theresa May discussed the Brexit. The two leaders talked among other things about the future relationship between the Netherlands and the United Kingdom.

,, There innumerable lines running between the Netherlands and the United Kingdom, historically, culturally and economically. Our benefit both societies and economies of the mutual cooperation. That we keep have May and I discussed, 'said Rutte.

He points out that there are going to change matters between the EU countries and the British by the Brexit voice.,, It is not just business as usual. '


The prime minister is the best for everyone that the withdrawal negotiations start as soon as possible. He has well understood that May take some time to prepare for these negotiations.,, These are complex and irreversible, '' said Rutte.