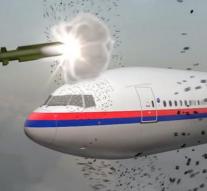 moscow - The Russian research team wants to transfer missing radar data on the air disaster with flight MH17 to the research team in the Netherlands. So says the Russian spokesman Vladimir Markin against TASS news agency.

The Public Prosecutor in the Netherlands, to provide international criminal investigation into the shooting down of the aircraft over eastern Ukraine leads, had Russia ' strongly '' yet requested additional radar data. A spokesman for the Public Prosecution is now not in the announcement of Markin.

The research team has previously received or data from Ukraine and Russia. Both countries have video recordings made available to the radar screens. However, the raw data of the primary radar data were not available. Russia has not transferred them because they would not be saved. The three Ukrainian systems in the area stood out.

The accident came all occupants killed. Among the 298 victims were 196 Dutch. The flight Malaysia Airlines departed from Schiphol and was shot down over eastern Ukraine.

The joint research team will present Wednesday in Nieuwegein, the first results of the criminal investigation. This is done first to the families in the morning. To 13. 00 pm there is a press conference.