Home / World / Russians want a permanent naval base in Syria 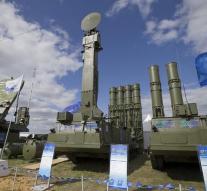 Russian naval vessels coming years in Tartus, a town about 50 kilometers west of Holms. It often involves ships equipped with facilities for rocket launches. Recently, the Ministry said that Russia will send its only aircraft carrier to Syria.

The Admiral Kuznetsov patrols provisionally from this month until January in the Mediterranean to Syria. From the 306-meter long ship aircraft to launch attacks on targets in Syria.