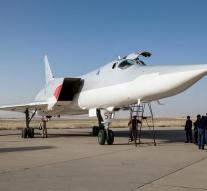 - Russia is to attack rebels in Syria no longer use an air base in Iran. Commissioned by the Iranian Foreign Ministry Monday know.

,, Russia has no base in Iran and there is not stationed, 'said a spokesman at the Iranian news agency Tasnim.

Moscow made a week ago announced that fighter bombers from Iran attacks were carried out on targets in Syria. That operation,, has been provisionally closed, 'said the Iranian spokesman.


Iranian Defense Minister Hossein Dheghan, did not show earlier on state television that Tehran was not happy with the publicity that Moscow had given to the use of Iranian bases.

Russia and Iran both support the regime of Syrian President Bashar al-Assad in the fight against insurgents and Sunni extremists.