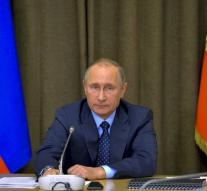 moscow - A Russian phone manufacturer plays smoothly and conveniently on the kindnesses that President Putin shares with the new American president Trump. In the shops, the gold iPhone 7 in which the effigy of Donald Trump is engraved.

Russian fans of the upcoming American leader must count down 197. 000 rubles for the jewel, converted 2800 euro. Manufacturer Caviar brought before a golden Putin phone on the market. Under the portrait of the president is depicted Crimea, the peninsula that Russia annexed in 2014.