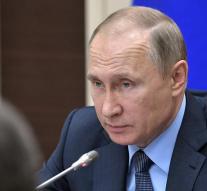 moscow - Russian President Vladimir Putin gave two women grace who were sentenced to years of cell punishment because of sending text messages. They sent sms to Georgian acquaintances about the relocation of Russian military equipment on the eve of an armed conflict with Georgia in 2008.

According to the law association Team 29, women received eight and twelve years of cell to send the messages. One of the women would have sent the text 'yes, they moved' to a friend. By this she referred to Russian tanks in Sochi, near the border with Abkhazia: one of the regions where Georgia lost control over Georgia.

Putin has now decided that the women do not have to put off the rest of their punishment. According to the Kremlin, the president decided to give grace on humanitarian grounds. He previously released a third woman early for a similar offense. The condemnation of women led to criticism of human rights organizations.