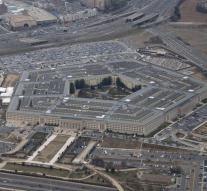 washington - An unarmed Russian military device was flown over some vital places in the United States on Wednesday. This was done in the context of an agreement between NATO and countries of the former Warsaw Pact, which was a longstanding, CNN news channel reported Thursday.

At a height of just over 1100 meters, the Toepolev Tu-154 flew over, among other things, the Pentagon, the Capitol, the CIA headquarters and the base Joint Base Andrews, home of the Presidential Airforce One.

The Russians also took a look at the vacation address of US President Donald Trump in Bedminster (New Jersey) and also flew across the Trump National Golf Course (Virginia).

The flight was within the framework of the so-called Open Skies Convention, which has been in force since 2002. This stipulates that participants must be allowed to fly in each other's airspace.