Home / World / Russians fire cross missiles on IS in Syria 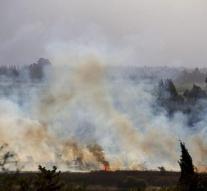 moscow - Russian strategic bombers fired crucifixes on targets of terrorist group Islamic State (IS) in Syria on Tuesday. The attacks were conducted by the Russian Ministry of Defense in the provinces of Deir al-Zor and Idlib.

The attacks happened at a safe distance from US special troops and US-backed militias, the ministry said.

Warriors of the Syrian Democratic Armed Forces (SDF) accused the Russians of bombing on the SDF in Deir al-Zor province on Monday. The SDF fight there by the River Euphrates against Islamic State.

Near to the other banks of the river, armed forces who are loyal to Syrian President Bashar al-Assad with Russian air support are engaged in an own offensive against IS. The Russians denied the bombing Monday.