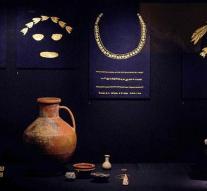 moscow - Russia has reacted angrily to the decision of the court in Amsterdam, the Allard Pierson Museum should be given a collection of borrowed gold from the Crimea to Ukraine. That statement, according to the Russian Ministry of Culture among others in violation of 'principles of international exchange' between museums and creates a 'very negative precedent.'

The court ruled in a case brought by both the state Ukraine as four museums in Crimea.

The hundreds of artifacts were loaned by the four museums in the Allard Pierson Museum for the exhibition Crimea- Gold and secrets of the Black Sea. During the exhibition in 2014 Russia annexed the Ukrainian Crimea. Therefore, the question arose whom the APM afterwards should decrease or return to the work: the Crimean Museums and thus indirectly to Russia, or Ukraine, and thus to Kiev. The museum got stuck between a rock and asked the court for a ruling.

Which ruled that the objects have to Ukraine, because it is the country of origin and the objects are cultural heritage of that country. Crimea treasures to be transferred at the expense of Ukraine from the Netherlands to the National Historical Museum of Ukraine in the capital Kiev. The Dutch court does not decide on who is the rightful owner of the Crimean Treasures. That issue should be fought according to her court in Ukraine.

Ukraine has to pay a sum of 111. 000 that APM was spent on storage, inventory and insurance of Crimea Treasures. By the Allard Pierson Museum amount was set at 300. 000. Why is not paid the whole amount is not clear, said a spokesman for the museum.

The parties have three months to appeal. As long running process, the art treasures and archaeological finds in storage remain at the Allard Pierson Museum in the Netherlands. The museums have let the Russian state news agency TASS know that they will appeal the ruling.