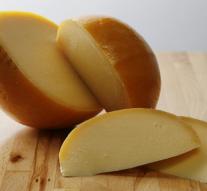 amsterdam - Even without sanctions against the West , Russia would import less . Two-thirds of the decline in exports early this year because of the financial headwinds for the Russians and has nothing to do with the sanctions.

Trouw writes Tuesday , based on an analysis of research SEO Economic Research.

Due to the economic slump is often chosen for imitation rather than imports. Thus Russians now eat more bad copies of 'Dutch' cheese.