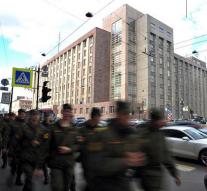 moscow - The Russian domestic secret service FSB claims to have uncovered a large cyber espionage. According to the service hackers have been in the computers of about twenty government agencies, academic institutions, military installations and defense companies.

The announcement comes at a time when Russian secret services are accused of being behind the computer break-ins at the US Democratic Party.

According to the FSB, the burglars malicious software loaded into the computer that is similar to,, other sensational cases of cyber espionage 'against Russia and other countries. All cases were detected.


The FSB did not say from which corner came the computer intrusions.