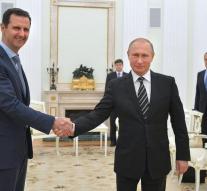 moscow - The Russian forces have built a bridge over the Euphrates east of the city of Deir al-Zor for the Syrian President Assad troops. The Russian television reported this Tuesday and showed images of the bridge over which military vehicles crossed.

According to the reports, the bridge was built in 48 hours while the builders were robbed by jihadists. In eastern Syria, Assad troops and US-supported Syrian Democratic Armed Forces (SDF) rely on jihadists who are mostly Islamic state (IS).

On Monday, the SDF dominated by Syrian Kurds complained that warriors on the Euphrates in the province of Deir al-Zor were bombarded by Russian fighter aircraft. The SDF is active on the left or north bank of the Euphrates and Assad's troops were especially on the right bank. The crossing threatens more clashes between SDF and Assad's military and militias. The government in Damascus, on Tuesday, announced through SANA's state press office its willingness to talk to Kurds about autonomy as soon as IS has been defeated.