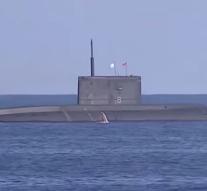 moscow - Russia has for the first time from a submarine in the Mediterranean propositions of Islamic state in Syria bombarded. That made the Russian Defense Minister Sergei Shoigu on Tuesday.

According to the minister an arms depot and a factory was built where mines were hit by Russian rockets. Moscow brought Israel and the US advance warning of the attacks.

The Russian air force has carried out over the past three days, three hundred flights over Syria. In addition, more than six hundred targets were attacked.