Home / World / Russians angry: 'It's definitely going well with us?' 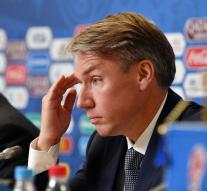 - The chairman of the Russian organization committee for the World Cup 2018 has dismissed the stories as complete nonsense.

Aleksei \u0026 nbsp; Sorokin had to answer questions about Sunday's message in the Mail on Sunday newspaper on Monday at a press conference that was about the Confederation Cup. 'Bizarre that this story now appears. It is apparently so good with the Confederations Cup that this newspaper will suddenly write about such things,' Sorokin mumbled.

According to Mail on Sunday, the 23 players representing Russia represented the World Cup 2014 in Richard McLaren's doping report. Some of them are now present at the Confederations Cup. 'Most of the players are at European clubs and have been tested by UEFA and FIFA for years. Both organizations have made it clear that all tests were negative. Why would we believe suggestions of unreliable sources while these are the facts?', Said Sorokin.

'This is thus non-news, big nonsense even. Apparently our tournament is so good that things have to be left out of the past. Let's just talk about soccer.'