Home / World / Russians and Turks together in Syria conflict 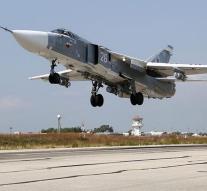 moscow - Russia and Turkey have executed Wednesday for the first time air strikes in Syria. There bombings were carried out by al-Bab in Aleppo province. In total nine Russian and eight Turkish fighter aircraft in the mission, according to the Russian Defense Ministry.

A total of 36 targets were under fire, said Sergei Roedskoj of the Russian General Staff. It would be a focused mission against fighters from Islamic State.

Russia supports the Syrian government in the fight against the rebels in the country. Turkey on the other hand supports the rebels, but at the same time delivers IS fighting. The country took a Russian jet down in 2015, which resulted in a deep crisis. Relations between the two countries now slowly improving.