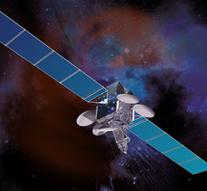 - A Russian military satellite has himself this year, parked between two American communications satellites. The mysterious visitor remained there for five months at 36,000 kilometers height are in orbit around the earth in space. What the satellite was doing is unclear, but officials satellite company Intel and US government officials raised the alarm , reports Space News website .

The Olymp-Russian satellite was launched in September 2014 and seven months later, positioned between the satellites Intelsat 7 and Intelsat 901. The Russian spacecraft was at times up to 10 kilometers from the American satellites. This, according to aerospace circles so close that it could potentially be a threat to the functioning of the communication satellites.

"This is not normal behavior, and we are concerned about it," said Kay Sears Intelsat by Space News. "Space is an area that needs protection." Sears, moreover, stressed that the Russian satellite has not hindered the Intelsat satellites.

Space Experts suspect that the Russian intruder information as possible trying to catch up. Intelsat has tried the owners of the Russian satellite to ask for an explanation but received no response.