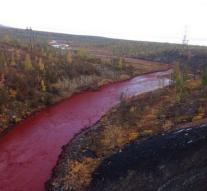 norilsk - Residents of the Russian town of Norilsk are puzzled now suddenly bright red water flowing through the river Daldykan.

Social media sharing pictures of the 'river of blood' and they speculate about the causes. Many fingers point to the nearby metal plant, which would have possibly dumped chemicals into the water.

The factory, owned by Norilsk Nickel, the largest nickel producer in the world, denies that chemicals have fallen into the river. However, keep the factory environment in the area monitored and reduced production, the Russian news agency RIA Novosti reports.


The river is not used for drinking water and there is no immediate danger to health according to local authorities. According to local media, it is not the first time that the river turned red.

Norilsk is known for the high degree of environmental pollution.