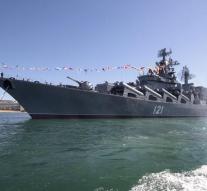 moscow - Russia on Monday began a military exercise in the eastern Mediterranean. The maneuvers to join the two newest naval ships of the Black Sea Fleet. They have cruise missiles on board.

The purpose of the operation, which was announced Thursday, is practicing with scenarios for terrorist attacks, the Russian Defense Ministry reported. Where the exercises are held exactly is not known.