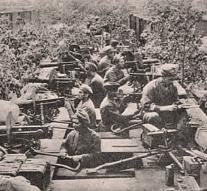 moscow - A 9 - year-old girl is in the Perm region, just west of the Urals, killed by a shell that still from the Russian Civil War ( 1917-1922 ) descended. It reports the Russian newspaper The Moscow Times , based on regional authorities.

A 12 year-old boy with whom she played outside her parents' home, was seriously injured. The authorities suspect that the parents of the killed child the grenade had been found earlier and had put old stuff in a pile.