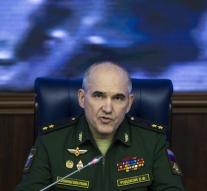 moscow - The Russian flotilla currently opstoomt through the Mediterranean to the coast of Syria will not participate in shelling of the Syrian city of Aleppo. The Foreign Ministry in Moscow dubbed Thursday that suggestion as 'absurd'.

The warning that the Russian warships against the hard-fought Aleppo could be used comes from NATO.

The main vessel of the flotilla is the huge aircraft carrier Admiral Kuznetsov. The 300 meter long ship has fighter planes and helicopters on board. The Admiral Kuznetsov is accompanied by eight smaller warships.

Aleppo is the largest city in Syria, whose eastern part is occupied by rebels. Russians and Syrians bombard the city for some time. Moscow insists that it for some days no bombing duties on the city.