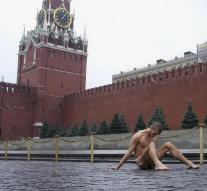 kiev - The Russian dissident artist Pyotr Pavlenski, which include the news came that his scrotum nailed on Red Square in Moscow, wants to apply for asylum in France.

Pavlenski (32) fled last month with his partner and their two daughters to Ukraine. They took the decision to divert after being questioned by police about a sexual offense, where they are accused falsely claimed them. They could get imprisonment for ten years.

In 2015 Pavlenski was arrested after the wooden door at the headquarters of the secret service FSB, the successor to the KGB from the time of the Soviet Union, was set on fire. He was once his lips sewn together to protest the treatment of the female punk band Pussy Riot. Another time he had his naked body wrapped in barbed wire.