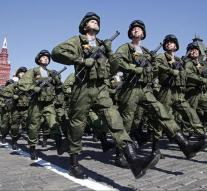 makhachkala - Special Russian security forces have slain Thursday seven members of a terrorist group in the southern Russian republic of Dagestan. A policeman was killed and three others were wounded. That the authorities notified in the regional capital Makhachkala.

The action against,, henchmen destroyed the bandits' still continued in the forests and mountains near Makhachkala. In the camp of the gang were found among other mortars and grenades, reported the Interfax news agency.

In the Northern Caucasus fight both criminal gangs and Islamist groups against the central government. According to the security services have hundreds of people in the region have joined the terror group Islamic State.