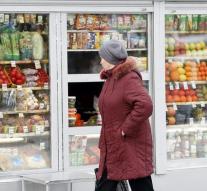 moscow - The Russian government wants to extend sanctions against the European Union until the end of 2018. That said Russian Prime Minister Dmitry Medvedev on Thursday, one day after the EU decided to maintain economic sanctions against Moscow for another six months.

By 2014, Russia has not taken any products such as fruit, vegetables, fish, meat and dairy from many Western countries. This sanction affects, inter alia, the European agricultural sector: the Russians imported annual billions of euros for food and dairy from EU countries.

The Russian sanctions imposed in 2014 served as a countermeasure after the EU had previously decided to economically punish Moscow. Those penalties were imposed because of the controversial Russian interference with the conflict in eastern Ukraine.