Home / World / Russia wants to build a bridge to Japan 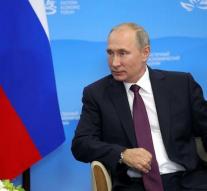 vladivostok - Russia intends to build bridges connecting the mainland through the eastern island of Sachalin with Japan. That has said President Vladimir Putin.

'We want to build a bridge to Sachalin and then connect the island to the Japanese island of Hokkaido,' Putin said Thursday on the billion project during an economic forum in the Russian port city of Vladivostok. 'It will promote cooperation,' said the president, according to the Russian press agency Tass. It would be a railway bridge.

Russian traffic minister Maksim Sokolov said at the conference that investment in the bridge to Sakhalin was estimated at around 500 billion rubles (7.2 billion euros).