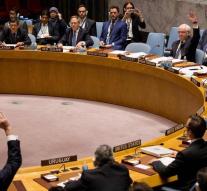 - Russia on Saturday in the UN Security Council vetoed a French resolution that demanded an immediate end to the air attacks on the city of Aleppo in northern Syria. The resolution also called for a cease-fire to allow humanitarian aid.

It is the fifth time in the 5.5-year-old conflict in Syria that Russia in the Security Council to block a resolution with a veto. The four previous times received support from Moscow Beijing, but this time China abstained.

Angola also abstained, while Venezuela voted against. Eleven of the fifteen members of the board voted for. To be adopted should have a resolution supported by at least nine countries. The five permanent members- the United States, France, Britain, Russia and China- have veto power.