Home / World / Russia : US weapons in the hands of terrorists 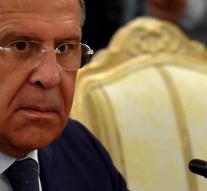 The US supports a variety of more or less secular groups in their struggle against the regime of President Bashar al-Assad, as the Free Syrian Army and the Kurdish YPG. " This also leads to concerns in the US, where the people and Congress begin to ask questions ", Tass news agency quoted Lavrov gave an interview to a Russian TV channel.