Home / World / Russia: US pretends to fight against IS 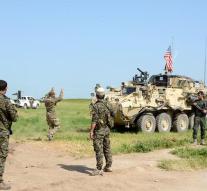 moscow - Russia blamed the United States for scaling down the number of air attacks on Islamic state in Iraq. According to Moscow, the jihadists could cross the border with Syria to cross the government-supported government army there.

The Russian Ministry of Defense opposed the international coalition against the terrorist organization 'as if it were fighting IS, especially in Iraq. 'In practice, the US-led coalition sharply reduced the number of air attacks in Iraq last month,' the Russians believe.

The result is, according to a military spokesman, that IS warriors pulled from Iraq to Deir al-Zor in Syria in large numbers. The Syrian government leader was trying to get that area back in that moment.