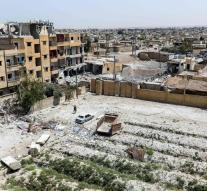 moscow - Russia and members of the Syrian armed opposition have made agreements on a third-called de-escalation zone. It concerns the area with more than 147,000 inhabitants north of the Syrian city of Homs, the Russian Ministry of Defense reported to TASS Press Office on Thursday.

The agreements include a ceasefire between the insurgents and the government army. The Russian military police are making sure that the parties involved agree. The Russians therefore want to create several control and observatory posts on Friday.

Among the Russians, the insurgents have promised among other things to drive fate of Fateh al-Sham, the former Al-Nusra Front, and Islamic state from the areas they control in the Homs government. TASS did not report which 'moderate' groups were associated with the agreement.