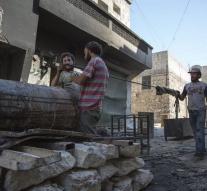 - "Russia still holds more closely monitor the ceasefire in force in Syria since Monday night. The Russians have at Aleppo put down a mobile command tower from which they verify that the warring parties respect the file. They also sent equipment to the largely destroyed city that can detect violations of the cease-fire."

"The checkpoint overlooking Castello Road, a major approach road has been handed the Syrian army after fierce fighting. The road was the main supply route for the rebels in Aleppo and must now bring relief supplies to beleaguered rebel districts."

"In and around Aleppo keep the warring parties so far reasonable to the cease-fire, the Russian army announced Tuesday. The armed opposition in Syria has not officially aligned with the file, but according to sources with knowledge of the facts it relies do it. Muslim extremists, who are also very active in Aleppo, tables are still targeted."