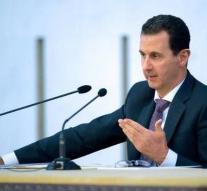 moscow - Russia finds US warning to Syrian President Bashar al-Assad not to use chemical weapons unacceptable.

Kremlin spokesman Dmitry Peskov said on Tuesday that 'no information' was known that the regime was about to use chemical weapons. According to the White House, there are 'possible preparations' going on for an attack. If they are carried out, Assad and his army will pay a high price, said spokesman Sean Spicer.

'We find such threats to the legitimate leader of the Syrian Arab Republic unacceptable,' said Peskov.