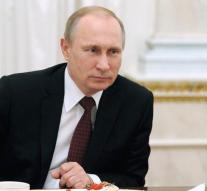 The Russian media reported Friday, referring to a statement by the Ministry of Defence.

The announcement comes two days after President Vladimir Putin promised to retaliate after what he called fighting between Russian troops and Ukrainian saboteurs in northern Crimea.


Ukraine denied that took place skirmishes. The country has its army on the border to the Crimea have been high alert.

Russia annexed the Ukrainian peninsula in 2014.