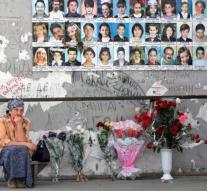 moscow - Russia appears to be in a ruling by the European Court of Human Rights (EHRM) on the hostage hostage in Beslan. The court sentenced Moscow earlier this year to pay about 3 million euros in damages to survivors and survivors.

The EHRM ruled among other things that Russian security services used excessive violence to end the crisis. As a result, many hostages came to life. The Kremlin previously knew not to agree with the ruling.

The court reported Tuesday that the verdict is final. The Russian Ministry of Justice then made it known. 'The participants in this process do not consider any further steps,' said the department according to Interfax.

The case revolved around a day of hostage in 2004 in a school in the south-Russian city of Beslan. Islamic terrorists hosted more than a thousand people, mainly children and their parents. The drama led to more than 330 deaths, of whom more than 180 children.