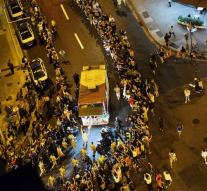 - The Russian Embassy in Brazil has denied that the vice consul has been involved in a shooting in Rio de Janeiro, where a robber was killed. Brazilian media reported Thursday on the authority of the police that the Russian vice consul shot a robber with his own weapon.

According to the newspaper O Globo was the vice consul with his wife and daughter in a car. When they stopped in heavy traffic, two men came on a motorcycle alongside. One of them hit the window with a gun. The man, who is trained in the martial art jujitsu, responded quickly. He snatched and fired the weapon, O Globo described the events. The robber died at the scene. His accomplice fled.

But the Russian embassy said in a statement that,, no representative from the Russian Consulate in Rio was involved '' in the failed robbery. According to the embassy, ​​the man who shot at the robber not a Russian name, while all diplomats do have.


Police in Rio, the uncertainty is still unknown.