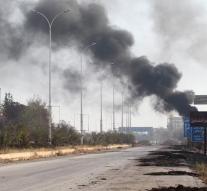 moscow - Because of insufficient action against violent Islamists in Syria, the West has made impossible the resumption of peace talks. That said Russian Defense Minister Sergei Sjoigoe Tuesday.

According Sjoigoe have supported rebels attacked civilians in Aleppo by the West, despite the fact that Russia and Syria their air attacks on the eastern part of the city had ceased temporarily. ' Is this the beginning of negotiations for peace in Syria was postponed until further notice, 'said Sjoigoe.

' It's time for our colleagues in the West to determine against whom they now fight: terrorists, or Russia, 'the minister continued. ' Perhaps they have forgotten who innocent people slain in Belgium, France, Egypt and elsewhere. To destroy the terrorists in Syria, we must work together and not sabotage the efforts of partners. Because the rebels will make use of them. '