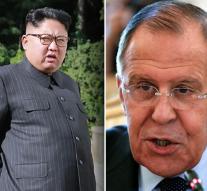 'Regarding the launch of North Korean missiles, we are holding resolutions of the United Nations, and we insist that the North Koreans who respect,' said Lavrov during a visit to the United Arab Emirates.