Home / World / Russia is not involved in convoy attack 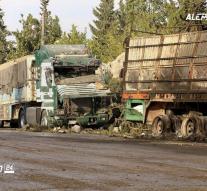 moscow - Russia and Syria have nothing to do with the raid on Aleppo on an aid convoy of the Red Cross. The information about the convoy was known to the rebels who control the area, but not with other parties in the conflict. This has the Russian Defense Ministry Tuesday expressed.

Monday is a relief convoy of Red Cross attacked from the air. Thereby fell about twenty deaths and lost a great deal of relief. It was reported that had carried out a Russian or Syrian device attack.