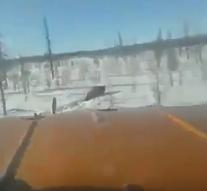 moscow - Russian animal abusers who intentionally cause death a brown bear, found itself evidence provided by filming their act and put on YouTube. Authorities in the Russian republic of Yakutia, where the men committed their act, the perpetrators are on the track. They suspect employees of a company that does geological research.

' Driven over him drive over him, 'exclaims one of the men in the video. is filmed from two angles how the bear, which has no chance through the deep snow to escape being hit. In the next picture the animal lying dead between two trucks in.

According to TV channel Zvezda runs the research yet. It was not clear whether the police have been involved.