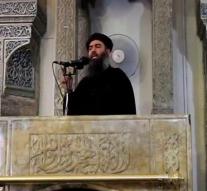 moscow - The Russian Ministry of Defense is investigating whether, at an air raid on the Syrian city of Raqqa, the head of Islamic State, Abu Bakr al-Baghdadi, has come to life. The air attack was due at the end of May, reports the Russian press agency Tass.

Baghdadi has been extinguished several times in the past. He is the leader of the terrorist movement, which Raqqa has made the capital of the self-named caliphate.