Home / World / Russia is considering supporting US to North Korea 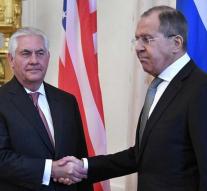 moscow - Russia is prepared to support a new United States resolution on North Korea, provided that military tensions do not escalate and it is aimed at finding a diplomatic solution.

Minister Lavrov has sent this position on Tuesday to a telephone conversation with US Secretary Rex Tillerson, reports the Russian Ministry of Foreign Affairs. Lavrov has also proposed to involve UN Secretary-General Antonio Guterres in finding a diplomatic solution to the crisis in North Korea.

Russian President Vladimir Putin will meet the South Korean leader Moon Jae-in in the margins of an economic forum in the Russian city of Vladivostok. There they will discuss the crisis, according to a Kremlin spokesman.