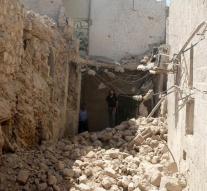 moscow - Iran, Turkey and Saudi Arabia should interfere explicitly with the search for a solution to the civil war in Syria. Finding that Russian Deputy Foreign Minister Mikhail Bogdanov. The three countries, each with their own interests and mutually warring allies in Syria must,, seat at the table and negotiate, '' said Bogdanov.

The Russian Minister said that he Tuesday in Qatar representatives of the Syrian opposition talks. The Supreme Negotiation (HNC) in which a significant part of the opposition is united and led the United Nations to the Syrian government negotiated peace, but knows in his own words from nothing. The HNC wonders who Bogdanov means when he talks about the Syrian opposition, said a spokesman.

The peace talks on Syria is still many months.