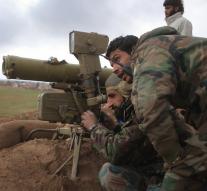 moscow - Despite the partial ceasefire in Syria is an international group of journalists shot in the north of the country. Among the 33 reporters have included journalists from Germany, Bulgaria, Canada and China, said a Russian military spokesman Tuesday.

Some had slight scratches,, 'to about held, the statement said. The bombardment must have come from Turkish territory according to Russia. The Syrian army blamed on the Islamist al-Nusra Front. The cease-fire agreed at the weekend does not apply to extremist groups in Syria.

The Russian Defense Ministry reported fifteen violations of the ceasefire within 24 hours. To monitor the situation in the war zone, Russia has three drones in the air and two radars at the military base in Latakia.