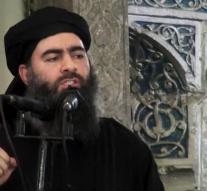 moscow - Russia has not been able to confirm that the leader of Islamic State, Abu Bakr al-Baghdadi, was killed last month by an air strike in Syria. Deputy Minister of Foreign Affairs Gennady Gatilov said this to the press agency Interfax on Tuesday.

The Iraqi al-Baghdadi is the one who in 2014 proclaimed a caliph in a mosque in Mosul that had to prevail over all Muslims. On Friday, Moscow reported that its armed forces were able to kill him in an attack on IS headings near the Syrian city of Raqqa in May.

Western and Iraqi officials appeared skeptical. 'His death has been reported so often that you have to be careful until IS comes with a statement,' said a European Security Officer.