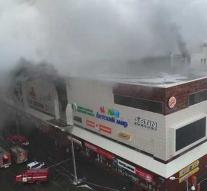 moscow - The Russian authorities have all the shopping centers in the country checked for fire safety. That made Prosecutor General Yuri Tsjajka known in the aftermath of the deadly fire in Kemerovo, news agency TASS.

'I have been instructed to inspect all shopping centers in Russia, regardless of size,' said Tchajka according to TASS. 'The prosecutor general's office will send employees to the cities where the situation is worst to coordinate measures. I expect this work to be completed within a month. '

The fire in a shopping center in the Siberian city of Kemerovo killed at least 64 people, including many children. President Vladimir Putin promised angry residents that those who are responsible for what he called 'criminal negligence' will be severely punished.