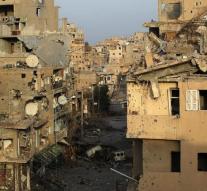 moscow - The Russian Air Force has certainly killed two hundred warriors of Islamic State (IS). The Russian Ministry of Defense announced that fighter aircraft fought terrorist warriors when they were on their way to the city of Deir al-Zor in eastern Syria.

According to Moscow, IS is concentrating its troops around Deir al-Zor because the terrorist group elsewhere in Syria has had to give up a lot of terrain. In the west of Homs province and in southern Raqqa province, IS warriors have been driven back by the forces of the Syrian government and the Russian Air Force.