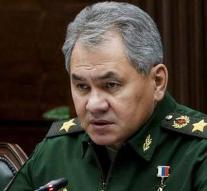 moscow - A Russian fighter plane hunted a fighter jet from NATO that came close to a device containing the Russian Defense Minister Sergej Sjoigoe. The incident occurred according to Tass press office over Baltic Baltic waters.

Above that sea was a incident earlier this week. An American exploration plane and a Russian fighter plane crossed each other just one and a half feet apart.

Which country was the hunted F-16 from NATO, has not been announced. Sjoigoe was on his way to the Russian enclave Kaliningrad.