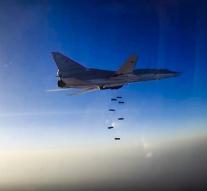 The attacks are carried out by Tupolev-22 bombers and Sukhoi-34 fighter aircraft that are stationed at an air base in the Iranian city of Hamadan. It is the first time that Russia attacked targets in Syria from Iran, since it began with air strikes to support the Syrian President Bashar al-Assad.

The move shows that Russia is expanding its role and presence in the Middle East. There are also media reports that Moscow with Iran and Iraq has requested authorization cruise missiles from the Caspian Sea to shoot through their territory on Syrian targets.


According to the Ministry of the attacks Tuesday were directed against targets of Islamic State militants and the Nusra Front in Aleppo, Idlib and Deir al-Zour.