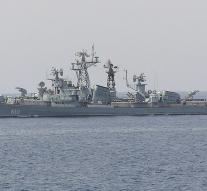 moscow - A warship of the Russian Navy said Sunday fired warning shots near a Turkish ship in the Aegean Sea. The Russians were in their own words compelled to do so, because otherwise the ships together would have collided.

The Turkish ship is not responding to other warnings, writes the Russian news agency Interfax. After the shots were fired, the ship would have fled without making contact. The military attaché of the Turkish Embassy in Moscow was summoned after the incident.

The relationship between Turkey and Russia has lately not too good. The proportions are up sharply since late November when Turkey, a Russian fighter jet shot down.