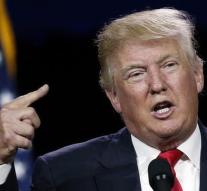 moscow - Russia approached the team around Donald Trump about the war in Syria. A Russian Deputy Foreign Minister Michael Bogdanov said Thursday that the Kremlin seeks contact with people who are likely to help Trump.

He hoped that Trump, which is in January US president understands that the crisis in Syria can not be solved without Russia. Bogdanov hopes that a new US president can provide direction.

Trump has previously indicated not wanting to focus more so fanatical on the fall of the government of President Bashar al-Assad. Russia supports Assad through thick and thin.

Russia Thursday also reported that it has bombarded by long-range bombers of the type Tupolev Tu-95 aircraft and an aircraft carrier racks of terrorist groups in Syria. There are several Russian aircraft carriers for the Syrian coast.